The audience member witnessing ‘Virata Parvam’ is immediately bombarded with conventional wisdom and cliches. Vennela (Sai Pallavi) is taught by her father, “Only two days in life are meaningful: the day we were born and the day we discover why we were born.” In the early days of the Internet, the quote was a fantastic viral E-mail. Then there’s Ravanna’s (Rana Daggubati) revolutionary poetry, whose lines are brimming with explosive passion but have lost their energy due to the continuous usage of stolen jargon in both folk traditions and mainstream culture.

Director Venu Udugula saves the most important scenes for the last act. The poignant climax has a sad tone to it. Even still, if Ravanna’s character hadn’t been so poorly developed, this stretch could have been even more heartbreaking. He has to express himself verbally by yelling at the top of his lungs. We understand he’s a Maoist. But why make Maoism synonymous with flamboyant poetry, Laal Salaam-ing, and loud declarations/denunciations?

Vennela is the author of the narrative. As a result, ‘Virata Parvam’ is the most heroine-centric novel about Naxal combat and the state’s retaliation. After secretly reading Ravanna’s illegal work, Vennela falls in love with him. She begins to fantasise of a life with him in the war-torn forest. 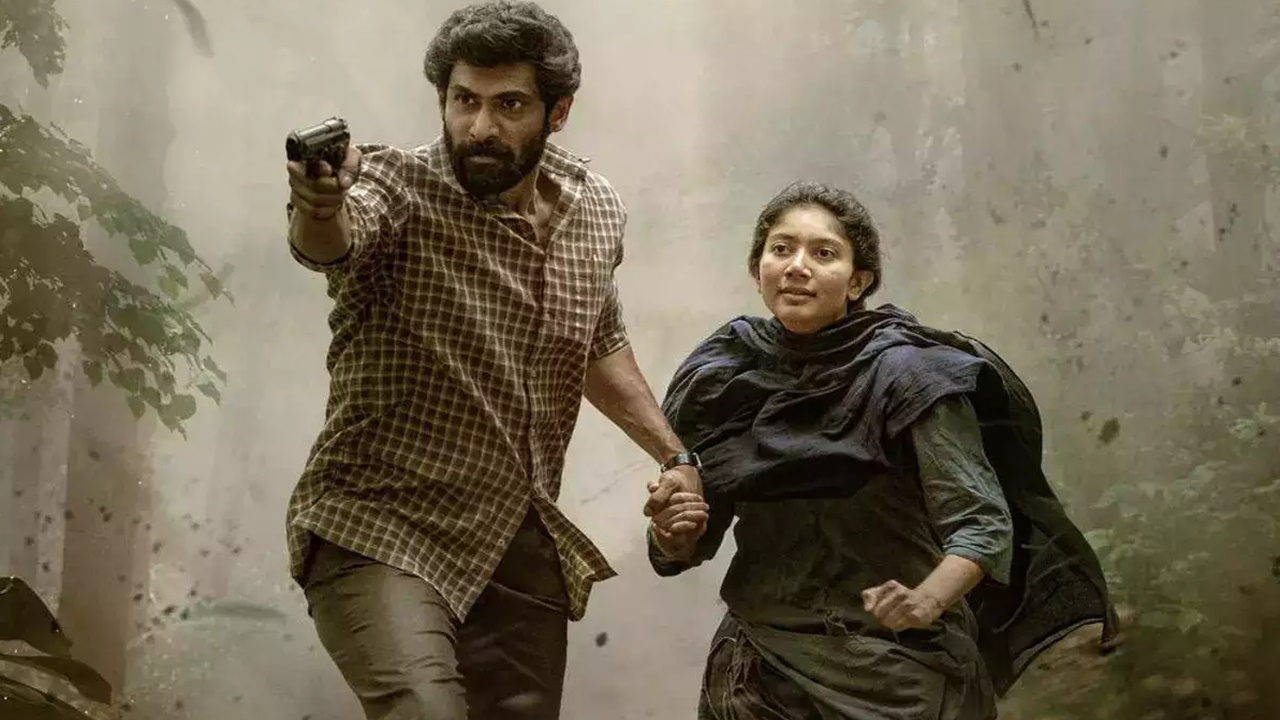 Ravanna is a mythological person in Vennela’s eyes, deserving of the reverence Mirabai lavished on Lord Krishna. She is a hopeless romantic who, in a predictable course of events, turns to romanticised Naxalism. If the conflict sequences between the Maoists and the police had been the ONLY unoriginal bits, ‘Virata Parvam’ would have been a forgivable film. Thankfully, even Vennela’s odd love for Ravanna isn’t staged with lyrical fancy. The only thing that stops the love tale from becoming ridiculous and weak is Sai Pallavi’s magnificent performance.

Vennela’s surreal love affair with a man who is unaware of her existence has a frenetic quality to it. Even when he isn’t on screen, this man is expected to have a commanding presence. This idea needed a sprinkle of excellent writing because of its theatricality. Vennela’s transformation from a common girl to a rare lover girl should have been plausible. However, it comes out as straightforward and unsophisticated. Vennela’s willpower and capacity to battle in life-or-death circumstances aren’t credible either.

There are no visual highs in the battles between the radicals and the cardboard cops. Themes such as incarceration brutality, police torture, and continual surveillance of suspects/villagers are brought up again and again. A top officer (played by Banerjee) delivers Mahabharata’s Virata Parvam to his boss in the middle of a conference designed to devise an anti-Maoist strategy in an inadvertently amusing sequence. Try to figure out why he does it. To inform him of the necessity to hire a spy. Clearly, the boss never went to the police school.

The film has a habit of appearing pompous when it comes to jargon related to or around Maoists. ‘State phobia,’ for example, is thrown around with the enthusiasm of a kid learning about radicals for the first time. But these are small issues in comparison to how Ravanna is made to appear as though he needs life lessons from Vennela on one occasion. Isn’t it because he’s flawless that Vennela adores him?

Nandita Das’ character contributes to the storyline, but Zarina Wahab’s mother will be remembered for the overly emotional interaction she has with her son. Naveen Chandra and Priyamani are passable, but Sai Chand, among the supporting cast, steals the show. The cinematography in the picture is outstanding. The BGM is adequate.

Sai Pallavi, who is currently promoting her next film Virata Parvam, has sparked controversy and received backlash from social media users.